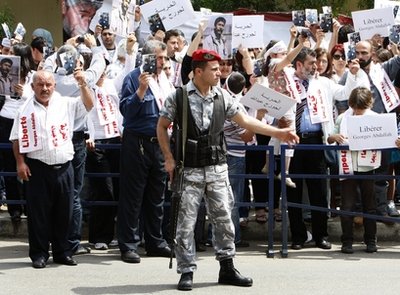 A Lebanese policeman, stand guards as supporters of Lebanese Georges Ibrahim Abdullah who has been jailed in France for 26-years, protest in front the French embassy demanding his immediate release, in Beirut, Lebanon, Friday April 30, 2010. Abdallah, of the Lebanese Armed Revolutionary Factions, or FARL, was convicted in 1987 for complicity in the killings of Charles Ray, deputy military attache at the U.S. Embassy in Paris, and Yacov Barsimentov, second secretary at the Israeli Embassy, as well as the attempted murder of U.S. Consul-General Robert Homme in 1984. (AP Photo/Hussein Malla)