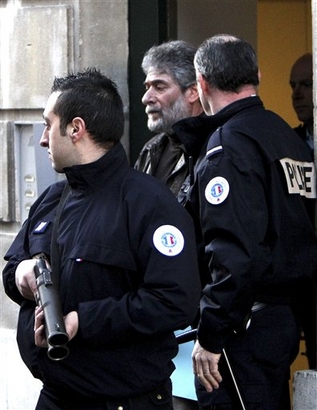 Georges Ibrahim Abdallah, center, escorted by French police officer leaves the Pau appeal court, in Pau, southwestern France, Thursday Feb. 18, 2010. The court will rule on his refusal to undergo DNA tests as requested by French authorities. Georges Ibrahim Abdallah, a Lebanese citizen serving a life sentence in France, was convicted in 1987 of complicity in the 1982 killings in France of a U.S. and an Israeli diplomat and in the attempted murder of another American diplomat. (AP Photo/Bob Edme)